Imagine if you have ideas for paintings, books, music or all sorts of other creative endeavours….but you lack the tools with which to express them.

Compound this with the notion that the luxury of creating is only for a select few – or those who do create seemingly  arrive on this planet with all the necessary skills and talents already formed!

In my last blog, Self-Discipline equals Freedom,  I described how I found the freedom to fully express myself by establishing new and positive habits into my life.    These routines and habits brought with them a daily structure which I still adhere to.    When I live within that structure I feel fulfilled and content…when I don’t, I feel a sense of frustration.

One of many large murals I painted after my turning point in 1987.       It expressed my new found freedom of working within daily rhythms…..and at the same time contributed to paying the bills.

I believe that prisons and rehabilitation centres are filled with people who were never given the gift of self discipline or the necessary tools with which to explore their creativity.         With a myriad of ideas running around in the mind, but unable to express them in a tangible manner, a deep level of frustration and resentment builds……

Is it any wonder that some of the most popular TV shows are of a creative nature…cooking, gardening, baking, etc.     These shows help people to focus.   They become involved with the process and often in observing are given the desire to have a go themselves.

Three 18ft hanging mobiles – installation for public building, USA.  –  Using a jigsaw, I cut the shapes for the mobiles from 6″ thick house insulation.    They were then painted white and installed into this 40ft high atrium.

In my ideal world, men, women and children would spend a period at the beginning of each and every day doing something creative.        This might be one of the solutions for peace and harmony the world:)

Speaking of which.      It was in the mural I have shown in this post that I first began to incorporate hummingbirds as symbolic imagery and so I leave you with  some of their colour and magic. 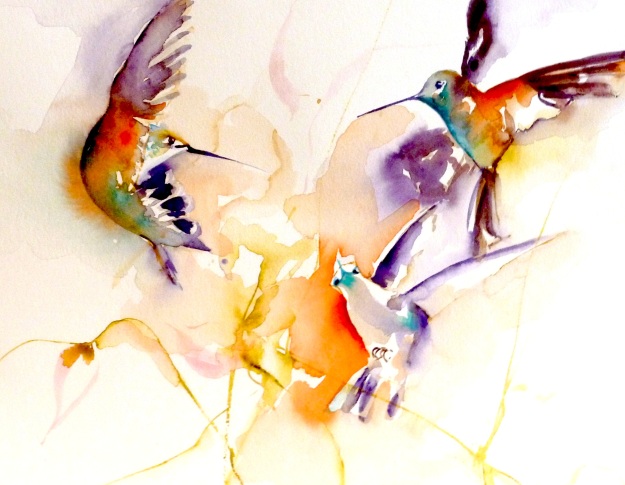