RANDOM VIGNETTES FROM MY LIFE STORY – 13

If anyone reading this has experienced a panic attack or prolonged anxiety they will know how awful it is and at times how totally crippling it can be.

From as early as I can remember up until I was thirty nine years old, I experienced and suffered from acute anxiety! Back then, no one talked about such things and indeed had any real understanding of what it meant. It was another one of those things where we were supposed to (coming from England) maintain a stiff upper lip and pretend that everything was just fine. Those were the days, certainly in the UK when to go to a therapist suggested neurosis. It was something you kept quiet about.

Long before I even understood what the word anxiety really meant I knew that I felt very uncomfortable in the company of people I didn’t know. ‘Uncomfortable’ is understating it – what I actually felt was fear – a visceral fear that seemed to be triggered by social situations.

When something is experienced in a visceral manner, it is experienced from deep within. There might be no rational explanation – but for the person – experiencing it…it is more than real.

What made it worse was that my upbringing was all about being and looking confident. In order to survive, this meant I had to learn how to project on the outside an air of confidence. Oh my goodness how painful was that.

When I was thirty nine years old – happily married and living in the States, I had what today would be called a break down, but because by then I was a master of covering what was actually going on, everyone thought I was OK and so expressed shock, and dare I say anger, when I stopped pretending!

Meanwhile several years before this incident my friendly local doctor had prescribed Valium! I thought I had found the panacea – the cure all – the magic bullet which allowed me to go into social situational feeling cool, calm and collected:)

Of course it wasn’t the panacea – or magic bullet – it was a drug and like most drugs once the initial glow had worn off I was left upset and confused to find that the anxiety was still there. The Valium had simply covered up what was really happening….

When I had this break down at thirty nine years old I put myself in a thirty day rehab which turned out to be one of the best things that ever happened to me.

Along with one on one and group therapy all of which were totally new experiences for me, participants were asked to attend a weekly talk about spirituality……….I wasn’t too sure about that. The man who gave the talk turned out to be really lovely. At the end of each session he would suggest to anyone who was going home that week to come and talk with him about any issues they might have.

I remember sitting with this man – overlooking the gardens…and saying that I didn’t want to go back out into the real world. That for me it was still a place of ‘jagged edges’.

He pointed to the trees and said – I could pray to a tree which made sense to me….

And then he said.

At that moment, I can never explain what happened but I knew that the anxiety had been lifted…..What can I say? This was thirty nine years ago…..

Over the years I have learned to live differently. No more covering up who I really am, – no more worrying about issues I cannot change….and also a deep understanding that I am not going through this journey alone. That there is indeed something much greater than me that I can tap into for support.

Hummingbirds symbolise that unseen love and support for me.

After this amazing experience…..I continued to have one on one therapy with a woman I really liked. She suggested that we needed to remove all the stuff inside of me that had manifested itself as anxiety.

I drew a box and made it black, shiny and totally impenetrable.

With the help of the therapist the box was removed rom my body….What an amazing experience that was. It was like having surgery.

Given that the world is going through such trauma on so many levels…not least of which the horrors of Ukraine….human kind of all ages are going to need help in order to cope.

Maybe we can start by helping one another.

In 1987, my husband and I divorced.   It was as amicable as is possible.    He has been happily remarried for the past 27 years and I am on friendly terms with he and his wife.

At that time I made a very important decision.    I chose to live and work in my 150 year old carriage house studio in West Chester, Pennsylvania –  which at the time had electricity but  no heat and running water.

I painted this large oil on canvas during this period, which symbolises for me the ending of one part of my life and beginning of another.    I was forty-three years old.

For the first forty years of my life, I was walking two paths….the first as a creative,  and the second, trying to fit into a society which made very little sense to me.

In short,  I was a square peg trying to fit into a round hole.

Walking two paths caused me to suffer from acute anxiety, which I now understand will inevitably occur when we try to be something we are not.

I have always known that once I make a decision, I can get on with things.   As the famous quote misattributed to Goethe says:-

Whatever you can do, or dream you can, begin it.   Boldness has genius, power and magic in it.  Begin it now.

Once I made the decision to be true to myself as a creative and let go of all the trappings (such a good word) – that’s exactly what happened – all sorts of events occurred that I could never have predicted, events filled with power and magic.

Large oil on canvas – symbolic self portrait – painted during this period.

It took one year to get heat and water into the studio…..it was the year I grew up and although most people thought I had gone mad – in fact I had gone sane….

So many stories to write about that year….it warrants a book, but let it suffice to say that it was the beginning of a new way of life and being and as soon as I made the choice/decision – all anxiety was removed.

Part of the studio after heat and water had been installed. (circa 1990)….this half was used for working and the other for living.     The space allowed me to work on several large canvases at one time. …which in an ideal world is how I like to work.

I have had many studios over the years, however this one holds the most significance. 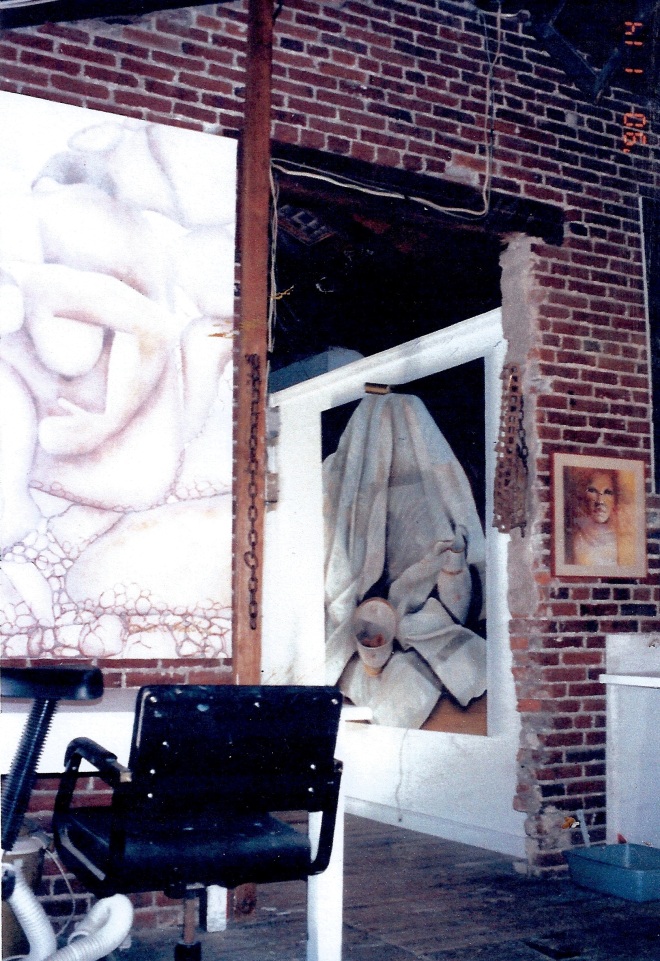