As is the case with so much today, gardening has become big business, where many have lost touch with the simple pleasures of working with Mother Nature to produce areas which encourage birds, bees and butterflies along with Silver Bells, and Cockle Shells…..

When I was living and working in The Magical Town of Crickadoon, I took over a tiny plot  – which had laid fallow for over 20 years.    Given that it was situated close to the River Usk – the soil was rich in nutrients.      I used to say that if I stuck my thumb in the soil, it would grow.

Rose/clematis arbour in the  garden

As soon as I saw the tiny plot of land, I visualised the cottage garden…..rather like a secret garden, where all manner of life could enjoy and flourish.

The first thing to be done, was to clear years of accumulated debris – turn the soil and lay flagstones.     The little shed in the corner was to stay….as was the water butt.

I received cuttings from my many friends in and around the town…and slowly but surely, I watched my garden grow. 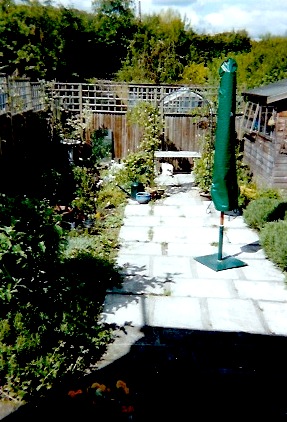 An old iron ladder found during the initial clearing, was propped up against the wall so that Christeve the Cat could visit the neighbours next door…..

Slowly but surely my initial ideas came to fruition.    Along with Christeve the Cat, the birds, bees and butterflies loved the garden – it became a place of tranquility and great joy for me.

This tiny patch of land fed all the senses…..visually it delighted, the sounds were those of  nature, and the smells, especially after it had rained, were intoxicating.

View from the living area into the garden….

During the past twenty years something has noticeably changed in the UK.   Whereas when I was a child, every patch of garden, (front and back) was used to plant beautiful flowers and or vegetables now we see more and more that most of our gardens, especially the fronts have been paved over for car parking purposes!!

This has removed very important draining areas for rainfall….

Developers in their rush to make money have built on …………… again removing important drainage  and exasperating flooding.

It’s as if we have all been sleep walking into the chaotic situation that we now wake up to….one that anyone with an ounce of intelligence could have seen coming many years ago.