“Travel makes one modest.   You see what a tiny place you occupy in the world”   Gustave Flaubert

During the past month, I have visited seven States, have slept in ten different beds, taken two Amtrak trains, one domestic flight from Washington DC to Atlanta, five car rides and one ferry.

Along the way, I have been with family, dear friends, three babies, numerous animals and have met some wonderful new friends who I am quite sure I  have met in previous lives…..

I dodged some major storms, experienced lots of rain and sunshine in almost equal measure and throughout it all so much joy and laughter prevailed.

After having made plans for the trip, I then let go of all preconceived notions and allowed things to unfold naturally, and they did in the most perfect of ways.    The magical hummingbirds were clearly with me all the way…. 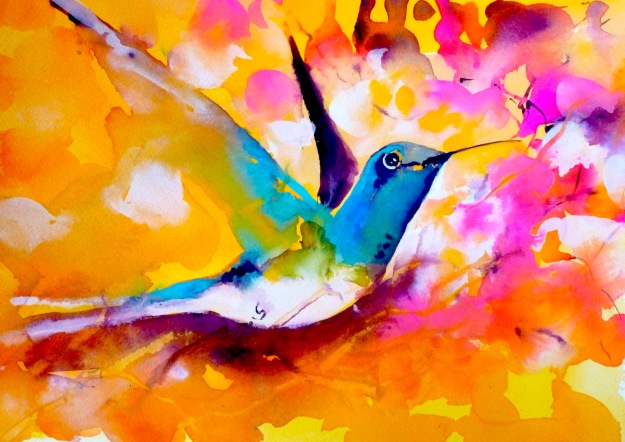 The adventure began with my beautiful daughter Christie meeting me at Boston’s Logan Airport.      I then got to meet LILO aka Fluff Puff –  He is as beautiful in the fluff as he is on my computer screen:)

Harvard Square – virtually next to where Christie lives in Cambridge.   This is where the adventure began. 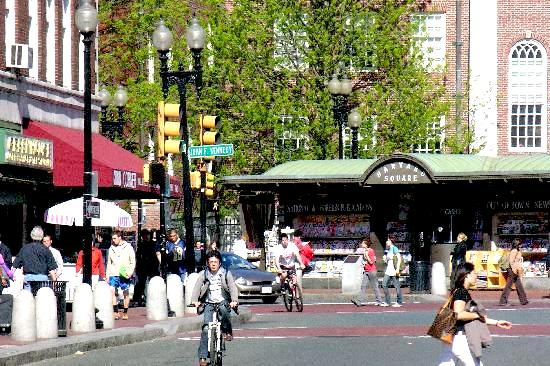 Boston is looking very healthy and the new water front development is particularly impressive.   When I visited five years ago, very little of it existed.

Next stop Ipswich Mass.…(about one and half hour drive from Boston) where cousin Kate and the now ten year old twins live.   Ten years old is when you still see the world from many different points of view.      They are so much fun.

The view from the cottage window, which changes constantly with the ebb and flow of the tides.      This is an area known for its delicious clams.

Then onto Essex in upstate New York, via Vermont and the Charlotte Ferry which crosses beautiful Lake Champlain.

Here we stayed with Sandy and Barbara Lewis.   I first met Sandy in New York fifty-one years ago when he interviewed me for a job.  (more about that in another blog)    Last time Christie and I visited the Lewis Family Farm was eight years ago…

The Lewis Family Farm offers the best USDA certified grass-fed beef.     A magnificent farm – from this view you can see Lake Champlain….

Here is an early morning view of the Adirondack mountains from the farm….

After two days of stimulating conversation and much laughter with Sandy and Barbara, we drove drove back to Boston.

Our next stop – Stonington, Connecticut  where my friend and fellow artist, RB Jones lives.    Currently RB is building a new studio, which we were pleased to see…plus he makes the best Margaritas ever:)

Along with being a beautiful town with excellent cafes and restaurants, Stonington is a vibrant seafaring community with an interesting history.      When we arrived the trees were in full blossom.

After three lovely days in Stonington, Christie and I parted ways temporarily….I then took the Amtrak train to New York City,  where I stayed with another good friend, Cyma Horowitz.  Christie returned to Cambridge to make sure Fluff Puff was OK……

Grand Central Station in New York – where Cyma introduced me to The Campbell Bar – tucked away in a discreet corner of the Grand Central Terminal.      Originally the office of American financier, John W. Campbell…this iconic New York institution is now a space where people can meet and enjoy the unusual ambiance, but very few know about it…………..definitely worth a visit. 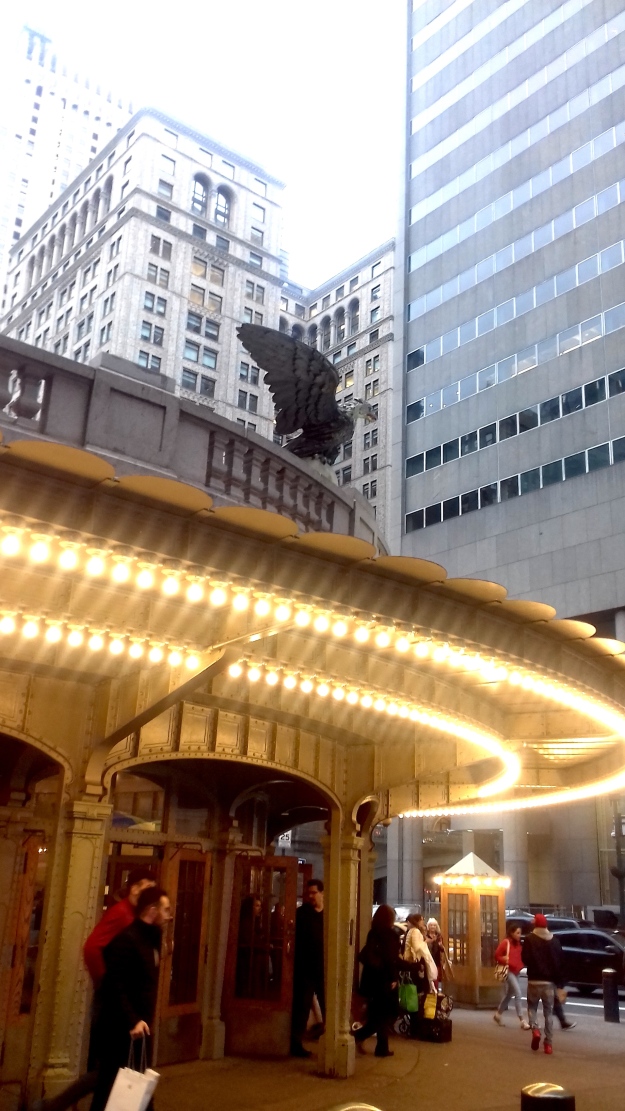 Cyma Horowitz and Ferne Speiler are the best people to show anyone around New York City.    Cyma has been a volunteer Big Apple Greeter....someone who shows visitors around the city.   Ferne, who has lived and worked in New York all her life is the person responsible for coming up with the name  ‘Crickadoon’.       When visiting me in Wales, she mentioned how much Crickhowell reminded here of Brigadoon….hence the name.

Next stop, via Amtrak to West Chester Pennsylvania  where I stayed with my good friends Tom and Carolyn Comitta.     Carolyn is Representative at Pennsylvania House of Representatives and was busy working on the primaries when I arrived.    Along with friends of long standing,  on this visit I met some new friends – again more about this leg of the trip later in a separate post.

After four days in West Chester, my son Jarrod Reed picked me up to take me to the farm in Nottingham, Pa where he and his partner Kendle live and work and what a magical place it is.

I will be writing much more about this leg of the trip and showing numerous pictures….but for this overview let it suffice to say that for anyone who enjoys the countryside and are interested in the Amish people’s way of life...this is a place to visit.   Jarrod and Kendle will be having an Air B n B at the Farm. –   Much more to come about that.

Jarrod with one of his favourite chickens

Jarrod took me around the farm on the Gator to enjoy the stunning views.  Kendle trains horses for dressage and is a fabulous cook.      Kendle, who I have known since she was five years old,  thinks about horses in the same way as I think about painting  and Jarrod thinks about music – in other words it is her life. 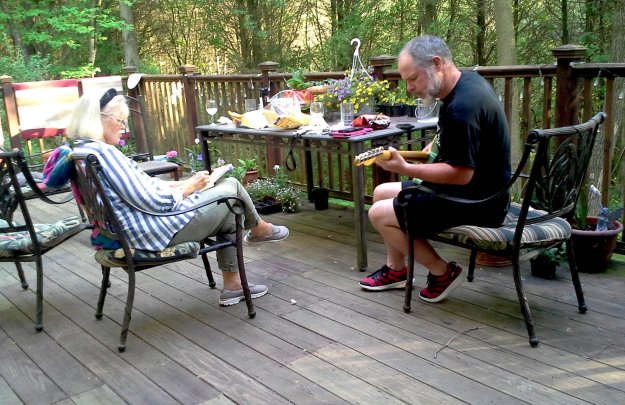 Jarrod and Kendle’s three immediate neighbours are Amish farmers.  I had the great pleasure to meet several of their community and will be writing more about this experience in a further blog.

Anne Buffington, Kendle’s mother is an artist friend of mine going back to 1973 – and so my next stop was Anne driving me from the farm to the Annapolis area.      We packed in a lot of conversation and laughter during that time….

Next day Anne very bravely drove me to Washington DC – taken from the car. 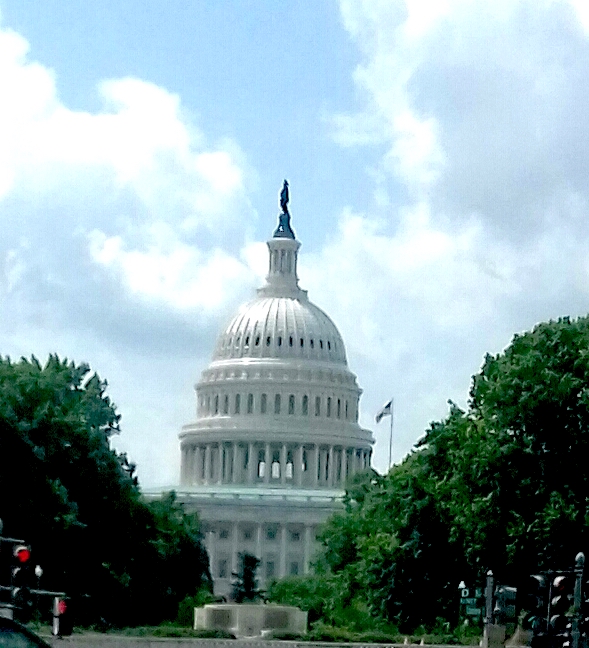 Here I re-connected with Christie and Jenifer Gausman.     We had so much fun for the ensuing 24 hours.   Here we are at Whiskey Charley – at the beginning of a superb evening. 🙂

Next stop Atlanta, Georgia.       After Jen’s lovely mother , Jorjie drove both Christie and I to the airport….Christie flew back to Boston and I flew onto Atlanta where I was met by my friend of many years, Lynn Kearns, and this is where the final leg of the trip began.

Staying with the Kearnsclan, as I call them is like being in the heart of family.    I was at Lynn and Stratton’s wedding many moons ago, knew their parents, have watched their children grow and now their grandchildren…hence this picture.   We have a much shared history.

Meet Millie the dog, Eva, Charlotte and Miles…..I am laughing so much because all the parents are jumping up and down in front of me getting the children’s attention. 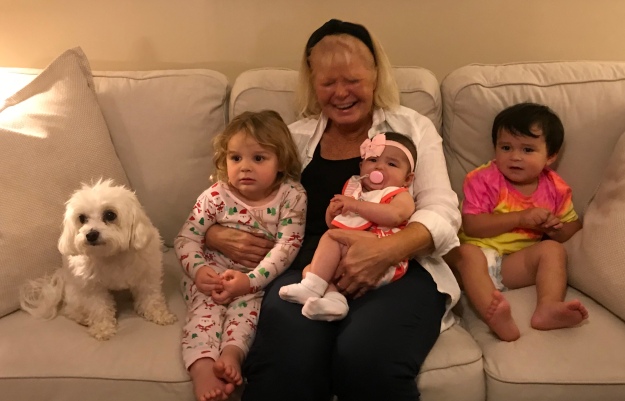 This is where the magical hummingbirds came to visit me every day when I was with the Kearnsclan.    I would sit in a connecting porch and paint as they would fly around.    Beyond is Lynn’s very impressive vegetable garden – all of which is surrounded by acres of ancient woodland…..rolling down to Lake Lanier.    A real retreat.

One day when Lynn and I were out purchasing water colour paper, we bumped into Rosemary Dodd – a real (Steal Magnolia) whose 100 year old father I painted as a portrait demonstration at the Quinlan Visual Arts Centre about 20 years ago.   One of many lovely coincidences on this trip.

Again I will be writing much more about this part of the trip, but two of the Georgia highlights were visiting the magnificent BAPS Shri Swaminarayan Mandir Hindu Temple, and on my final day becoming an anchor woman for CNN!

Although this was not a painting trip per se, I did do a lot of sketching and have returned filled with many thoughts and ideas…..in other words the creative juices are flowing.

I finish this overview with a magical hummingbird. 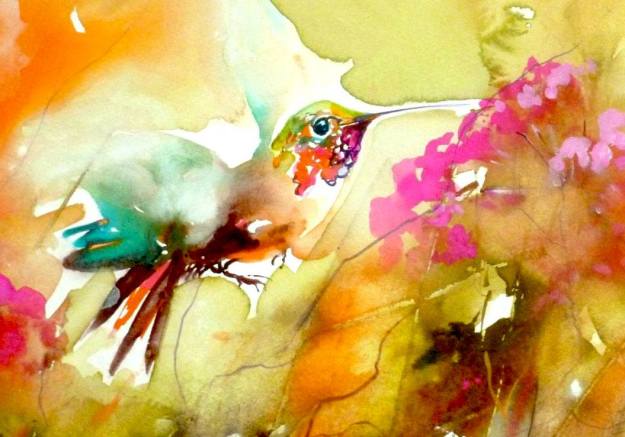