It is important to remember that this course is all about loosening up and at the same time focusing on observation and imagination……Shown here is just a fraction of the work completed…including the all important sketch books that everyone carried with them at all times.

Once again the list of Janet Weight Reed tips and sayings given to everyone at the beginning of a course.

The following are watercolours/sketches made by the group last week in Olhao Portugal. See previous post for an overview of the week…..

Jayanthi.…has been coming to my courses for sometime.    This vibrant watercolour was inspired by the Saturday market in Olhao.

Watercolour Montage of Olhao by Jayanthi – a classic example of observation and imagination, 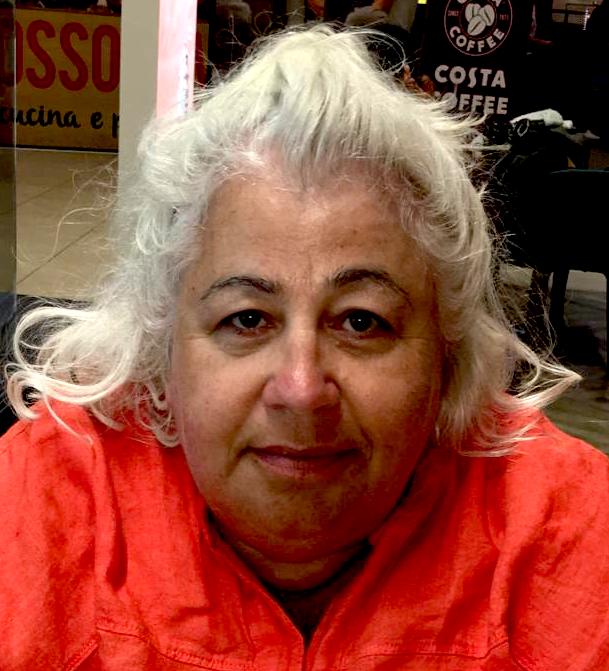 A view from floating in the pool….by Jill(1)   watercolour. 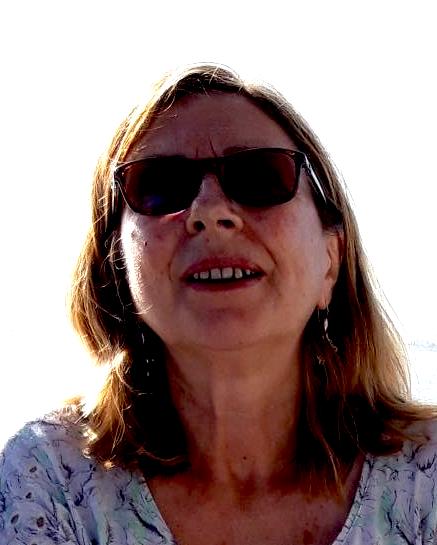 JILL (2).  Fruit and veg from the Saturday Market. 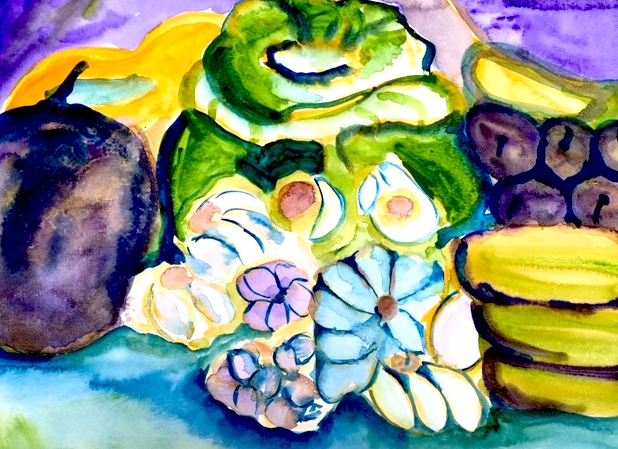 MOIRA came to my course in April and so it’s exciting to see her development….getting much looser:)

Trees in the Nature Reserve Pine Woods by DORA

DORA – Joe reclining on Armona beach with Olhao in the distance…

NAN – Fish from the market. – watercolour

CLAIRE – who sketched the whole time…..(unfortunately I don’t have photos of her sketches)…..but they were superb. 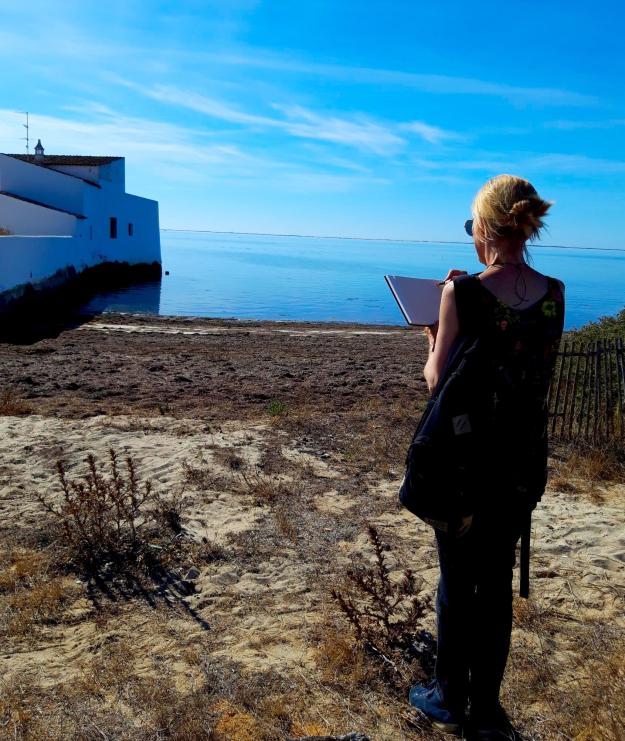 CORYN –   Coryn and I might go on the road together….we would make a great comedy team:) 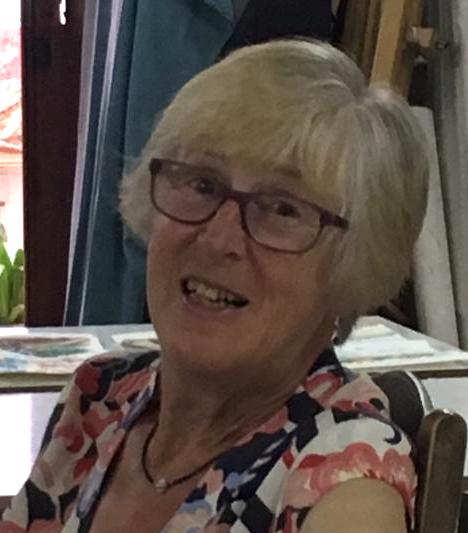 LIZ – casting a beautiful shadow at the Mill. – I am waiting for images.     Liz attended my course last October and so it was lovely to see her again…..

BRENDA – sketched all the time and made some lovely watercolours….Unfortunately I don’t have any photographs of them.    A fascinating woman – Brazilian and therefore fluent in Portuguese – and a glider pilot…… 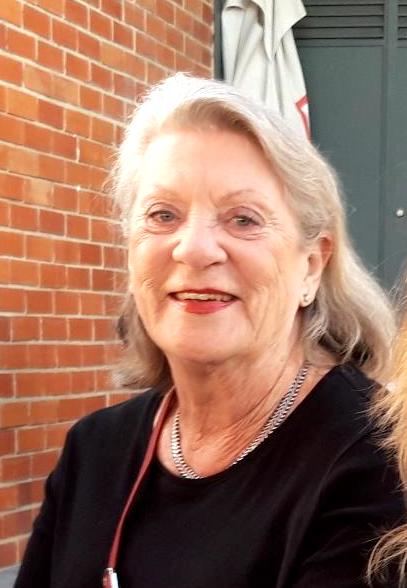 MARY – who has attended my courses before, made some lovely watercolours – however again I don’t have any photographs of them…hopefully later. 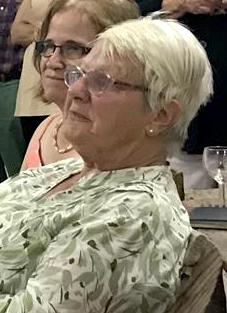 Tessa and Bob are from Sydney Australia and so on their way home from Portugal they stopped in New York and bought some new paints.      They are now in beautiful Vancouver where I am quite sure they are sketching every day.

These are the pigments they picked up in New York.

I couldn’t finish this post without including our two non-painters Joe and Alan.   They contributed so much to the week on many levels and were a great deal of fun. 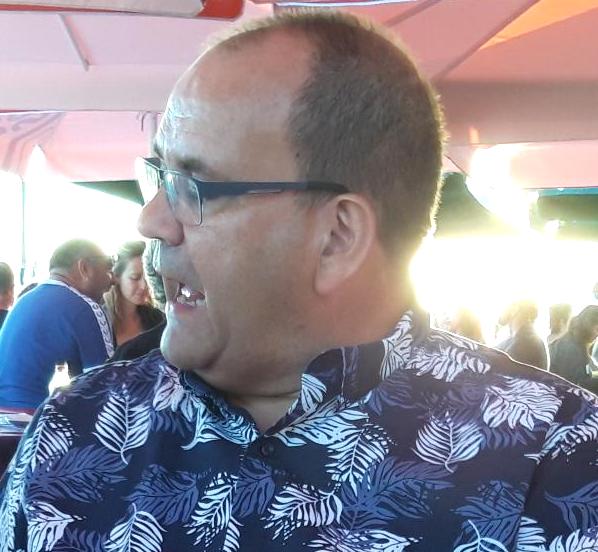 Thank you one and all for a lovely week – and of course keep painting and sketching.

“Happiness is not a matter of intensity but of balance, order, rhythm and harmony”   Thomas Merton.

Stair Hole, Lulworth, Dorset – part of the Jurassic Coast, a World Heritage Site, which spans 185 million years of geological history.  – reminding me that we are but a blip in time and that ultimately Mother Nature rules!  watercolour 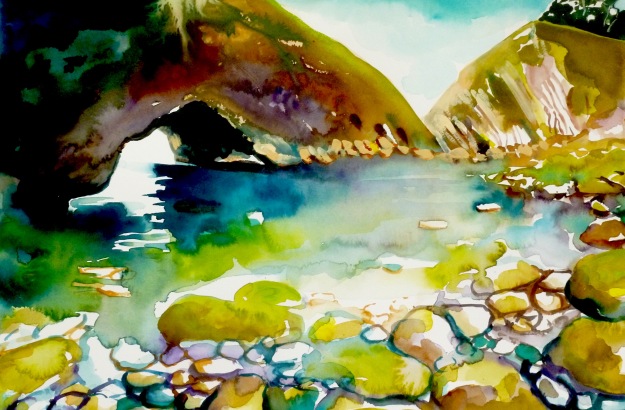 Given that I hadn’t been on the Isle of Wight since 1965, I decided to take a taxi from the Ryde ferry terminal to Bembridge where I was staying.      The taxi driver was lovely…a man who had moved to the Island from London thirty years ago.      As he pointed out, the Island works best for young families, people over sixty, and of course those who love to sail  – Cowes being a world class sailing arena.        His grown children have returned to London, a story I heard several times.     As he pointed out that despite a good internet connection, until the day a bridge or tunnel is built, connecting the Island with the mainland,  life as it is will probably continue.       (let’s hope they never build a tunnel or bridge…..)

After checking into my B & B I had planned on seeing my friend, artist and blogger, Sarah Vernon (First Night Design),  however Sarah was taken into hospital on the day I arrived!       I am relieved and pleased to say that Sarah is now home, and will tell you all about her ordeal in her own words when she is more rested.   Get well soon Sarah.

Proving that there is a silver lining in most circumstances,  I did get to visit Sarah in Newport Hospital, which gave me the opportunity to take the beautiful and relaxing one and a half hour bus ride from Bembridge to Newport.

One of the photographs I took of Sandown from the top of the number 8 bus from Bembridge to Newport….it was a beautiful day. 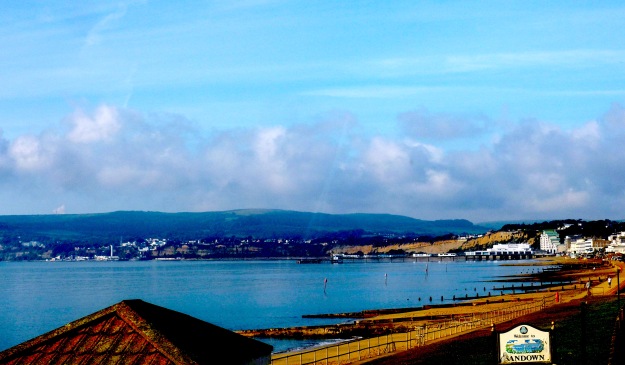 My overall first impressions were of a much slower pace of life,  of almost going back to how the UK was when I was growing up.    Everyone I encountered was extremely helpful, including the bus drivers.    People still queue.…and of course being a Brit I do like queues :).      There was no litter or graffiti….a sense of order prevailed.      In short it all felt very manageable.

It felt as if the Island has not outgrown its infrastructure.  Life appeared to be integrated rather than fragmented.    The opposite to feeling overwhelmed and isolated – which I believe is a huge problem for many in today’s society.

Newport, the principal town of the Island, is often referred to as its capital.    Again very manageable, very easy to walk around…..I had a wonderful fish and chip lunch for £4!    Newport Hospital was just a short bust ride away from the town centre – everything felt easy.

Outside the Art Centre in Newport.

This visit was about getting a feel of the place.     Would I want to spend time there painting?    These are always my prime questions.     The answer is yes.    I would choose a village location with a bus route.    This would allow me to walk to shops/pubs etc, and with my London bus pass – free bus travel.     So it will definitely go on my list of places to explore and paint.

Part of the beautiful Isle of Wight coastline. 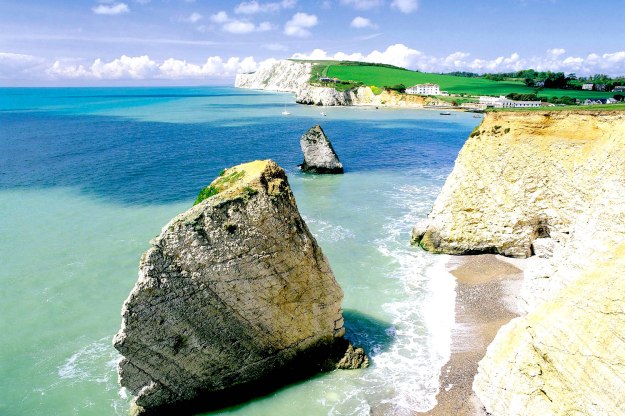 I returned to the mainland via the Cowes ferry to Southampton where I had the sudden realisation that the last time I was on Southampton dock was  January 28th 1966 when I took the United States Liner to New York!   Talk about deja vu.   My friend Suzy, whose office sits right on the dock then drove me to Dorset.

I stayed with art college friend Maureen….always very enjoyable.       Although I don’t do very well with cars (anyone who knows me will  be smiling at this:)  Maureen took me to Lulworth Cove – part of the Jurassic Coast- and I am so pleased she did.     The weather could not have been more perfect and most importantly it was  visual feast.

This image of Lulworth Cove is taken a half a mile away from where I painted Stair Hole…. 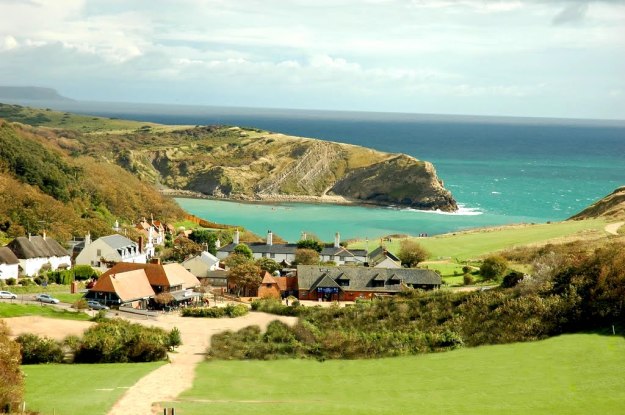 I began this post with Thomas Merton’s quote about balance, order rhythm and harmony.…elements I believe we all need in our lives.

Along with Crickhowell Wales, Saorge and other locations in France, the isle of Wight goes on my list of places where these elements are still to be found.

I am constantly reminded as I paint the magical hummingbird of how we can learn from Mother Nature – be it on the minute scale of the hummingbird or the rugged and grand scale of the Jurrasic Coast.       It is at our peril that we lose sight of this.

A magical hummingbird drinking from the sweet nectar of life. – watercolour/gouache