I am going to write the occasional short story on my blog, based on personal experiences.

This is a true story about my meeting with Sid the Boxer.

‘It was mid morning in the summer of 2005 when I was sitting on a bench in a small park situated by the River Thames between Barnes and Chiswick.       I had spread out my watercolour paraphernalia and was sketching the view.

I suddenly became aware of a group of people walking from the other side of the park towards me.    As they came closer, most of the group veered away towards the river path, but one man, carrying a big can of beer, had clearly decided to come and see what I was doing.

As he approached – he asked if I would paint his portrait.     I think I surprised him when I agreed to do so.     I suggested that he sit on the other end of the bench from me, and relax.

As I painted two rapid portraits, I learned that the man called Sid the Boxer, was living in a half way house having recently been released from Wandsworth Prison for assault and battery!

He told me about his life….how he had been part of a ‘travelling family’ and that he had a daughter, who he had never seen.     He had used his boxing skills to make money and as he said, gained a great deal of respect in the prison system because of his boxing reputation.

He was clearly fascinated with my painting, and just as I finished the two sketches…he asked me if I had gone to a special school to learn to paint.     I told him that I had studied at The Medway College of Art in Rochester, Kent – and then he told me with great delight, that he had gone to Borstal (a famous youth detention centre)  in Rochester.

I gave him one of the sketches and kept the one shown here for myself and then we shook hands and said good bye.

I often wonder what happened to Sid the Boxer, and where his portrait  hangs….I do hope the Magical Hummingbirds are watching over him:)’ 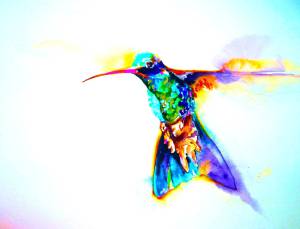