‘Procrastination is the bad habit of putting off until the day after tomorrow what should have been done the day before yesterday.’   Napoleon Hill.

This does make me smile.    Up until the age of nearly forty, I tended to procrastinate.

To make up for my procrastination, I would then binge paint, or do things in great bursts of energy, lacking any real rhythm or consistency which played havoc with me and my work.

I would write long letters to people, and then not send them!   What was I thinking????

Then, everything changed.     When I was almost forty, I made a personal commitment to establish rhythms in my life.     Rhythms and schedules that would work for me.

The suspect word  ‘moderation’ came into my daily life and with it  I found that I was able to accomplish so much more.

As time went by, I recognised that rhythms and routines can and do evolve with the inevitable changes we experience in life….after all, nothing is set in stone. 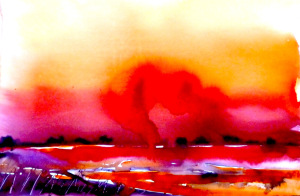 It’s that time of year when the sap has begun to rise and thoughts of Mother Nature’s bounty come to mind.

My little cottage garden in the Magical Town of Crickadoon (Crickhowell, Wales)

After having lived and worked in the States for twenty eight years, In 1993, I returned to Crickhowell, Wales to stay with my cousin and her family.

Crickhowell is a small market town which sits in the Usk Valley where the Brecon Beacons and Black Mountains meet.

During the twelve years that I lived and worked there,  I designed a small cottage garden, which gave me immense pleasure and taught me a great deal.

I saw this picture in a magazine and used it as the template for my garden…. 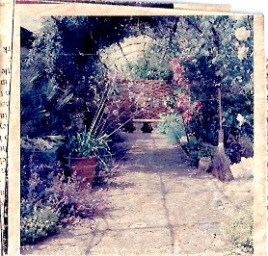 The plot behind the cottage was small and had laid fallow for twenty years.    The first thing I did was to clear and dig the garden over….and then lay flag stones. 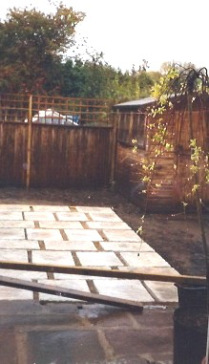 Friends with established gardens gave me cuttings, and slowly but surely, the garden began to take shape.

Before my eyes, I watched the transformation from uncared for patch to a place that welcomed birds, bees, butterflies, cats and humans.

Note Christeve the Cat climbing the ladder which took her into the neighbour’s garden:)

Growing a garden from scratch requires commitment and patience, however  the satisfaction gained is enormous…

As the garden began to mature, I was able to throw open the french doors and have all my senses fed, whether I inside or out.

When I moved to London in 2005, I was very sad to say goodbye to the garden, but at the same time grateful for what it gave me.

Clearly the hummingbirds were weaving their magic.

The story behind the painting… 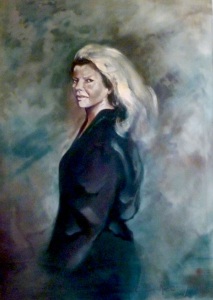 It is a story about transformation and turning points….

As I write this, I am experiencing another period of transformation and given that the painting arrived with me in London on Monday, having been housed with friends in Wales for the past eleven years, it seems the perfect time to tell the story…..with the help of magical hummingbirds, of course:)

The portrait was painted in my large carriage house studio in West Chester, Pennsylvania.  The year was 1987.

From as early as I can remember, up until the time of painting this portrait, I suffered from acute anxiety….a crippling anxiety, made worse by the fact that I did everything I could to hide it.   For the most part, aided and abetted by tranquillisers!

In 1987, my son was 21 years old and my daughter fourteen…and to all intents and purposes our world appeared to be very rosy.    In hindsight, I can see that my husband and I did the very best we could given the tools we had.

In 1986, I received treatment for my love of tranquillisers during which time I met someone who said the right words at the right moment.

The words were ‘Stop fighting it……!’

I will never be able to explain what happened, but at that moment my life changed….and although I have lived through some difficult times since, I have never experienced the horror of the crippling anxiety again!

The self portrait is a response to that moment of transformation…

In this symbolic still life self portrait painted in the same studio, I included a photograph of the painting.

And so as I move gratefully through this new period of transformation, I am ready for a burst of creative energy…..I am ready for the next part:)

One certainty of life is that there will always be change.     We go through good times, challenging times, the weather is wonderful or not so good, all depending on where we are and what we are doing.

One of the many things I have learned in my 68 years is the importance of staying open to all possibilities, and so it was last weekend when I attended a seminar here in London.

For me, it was one of those transformational moments, which I will write more about next week when I have had time to assimilate what I experienced.

So much of my work is based on symbolism and so today I offer this peacock, which is a detail from a large oil painting I am currently working on.     The peacock symbolises, resurrection….and in this instance for me, yet another new beginning.

Today I am off to see the work of one of my heroes, the great English painter Joseph Turner at the National Maritime Museum.

I wish you all a beautiful weekend.

I am someone who enjoys reading obituaries, and so I was interested to learn that Gabriel Axel recently died, aged 95.    He was best known to the English-speaking world for the film Babette’s Feast, adapted by Axel from Isak Dinesen’s short story of the same title.

I first saw this Danish production when it was released in 1987.    It was a film that spoke to me in many ways, not the least of which was its visual beauty. 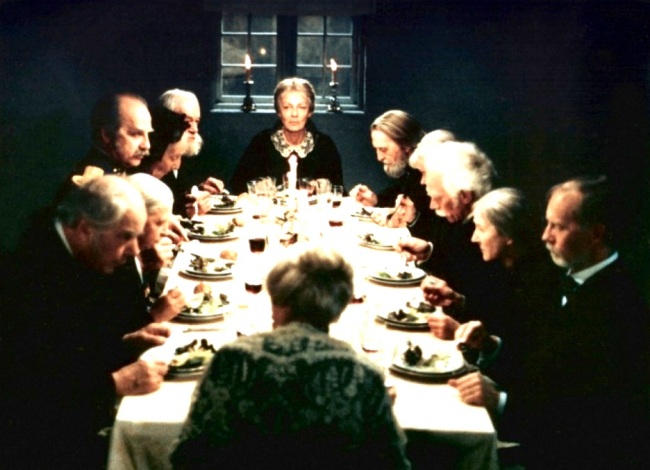 The story is about two 19th century spinsters, Phillapa and Matine who live a pious existence in their fishing village on the west coast of Norway.

Using flashbacks, the film returns us to their youth where we see the lives of two young women controlled and governed by the tyrannical rule of their minister father.

After the fathers death, Phillapa and Matine continue the faather’s dictate of self denial and chastity.

Much later in their lives it was the arrival of  Babette, a refugee from Paris that was to bring transformation not just to Phillipa and Matine but also to the few remaining souls who had been part of their father’s flock.

The pivotal moment is when Babette wins some lottery money and invests the winnings into a memorial dinner to mark what would have been the 100th birthday of the dead Minister.

The feast which celebrates life, love and food, is made up of all sorts of exotic delicacies and wine…….

To begin with the villagers are horrified, but as the sensuality of the experience works its magic, they are transformed.

This is a story that resonates with me on so many levels, and reminds me of a very special person in my life, Madame Nottale.

I painted this portrait of Madame Nottale in the eighties, after she had prepared a feast in my honour when I visited her in Marley le Roi, outside of Paris.

A remarkable woman on so many levels, Madame Nottale’s life would make an amazing book.     Along with her extraordinary experiences as a child and in World War 2, she  raised eight children, continuing to work as a nurse throughout.   Her husband, was away at sea for most of the time.

I met Madame Nottale through her daughter Claudia, who came to stay with my family in 1978 when I was living in the States.    Claudia introduced me to her Mother, Madame Nottale on a visit to France in 1985.

A small oil on canvas portrait of Claudia as a young girl.

Madame Nottale continued to work as a nurse into her late seventies.     Over the years, she had suffered great loss, and yet continued to be there for her family and those that she was nursing.

Then around the age of eighty came transformation…..

For the first time in her life, she was able to do what she wanted to do, which was write and paint.     Her family were amazed to see this huge part of her being revealed.

When I visited her two years ago, now in a nursing home, her room was full of paintings and drawings….every surface was covered.    She asked me to call her Annette – and together we talked about painting, colour,writing, love and life, all of which Annette embodies.

Annette’s whole countenance had changed – a softness had come to her face.   During our time together, I made a quick watercolour sketch which I feel expresses her transformation.

Babette’s Feast, and the story of Madame Nottale show us that it is never too late to open up to the simple joys of being fully alive. 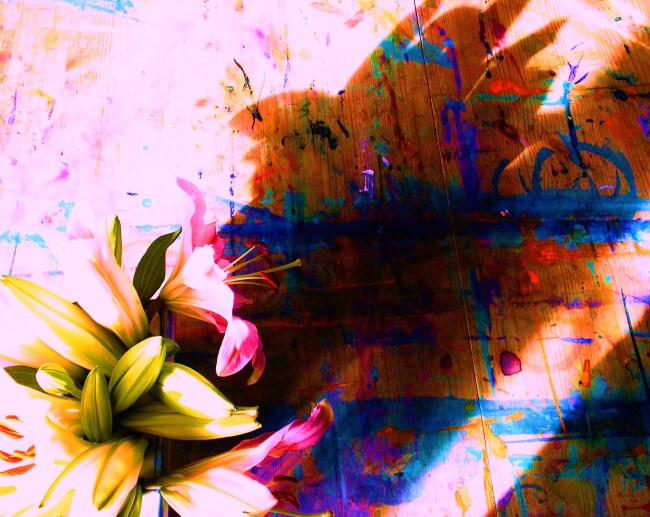 In 1987, when I was just 37 years old, I underwent a huge change in my life.    The change was physical, emotional and spiritual.   At the time most people who knew me thought I had gone mad……but in fact, I had gone sane. 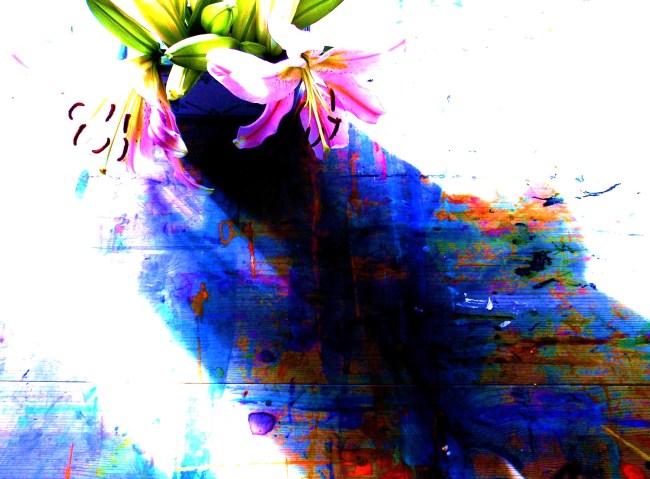 I was to learn that when we experience a major transformation, life doesn’t change overnight.

Rather, transformation heralds the beginning of a long journey of many mini awakenings….lots of light bulbs flashing on, illuminating areas which prior to the change had been at best muddled and confused.

I learned that transformation doesn’t mean that we will never make mistakes again…..far from it.

I learned that when I make mistakes, I am able to see them in a different light, to understand their source and have the courage to confront whatever it is head on and work through it.

One of the first lessons I had to learn back in 1987 was the lesson of letting go.

Letting go of so much of the stuff in life that had burdened and held me back.     Stuff that I had become overly attached to…..Stuff that owned me, rather than me owning it! 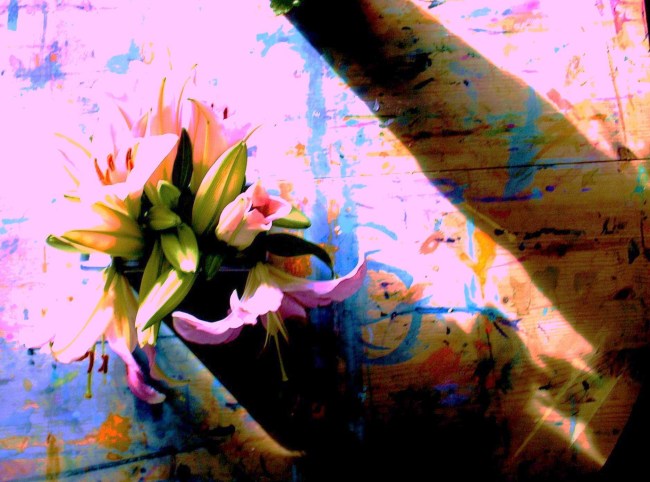 Like everything, this is an ongoing process…..it’s not something I suddenly got, and then never had to deal with it again….

Many times over since 1987, I have found myself becoming attached to the animate and inanimate stuff of life, only realising what a hold it had on me when I was able to let it go…..

The Painted Table was such an object.

When I moved to London eight years ago from The Magical Town of Crickadoon in Wales, I brought the table with me…..and began to use it as a painting table in my small London flat.

About two years ago, it  became apparent that it didn’t work anymore….it was heavy and wasn’t practical in my new space…..but I had become attached to it, especially given that it was covered with paint markings.

Then I bit the bullet and gave it to the man who is caretaker of the flats I live in……he needed a table.

With the giving of the table to someone who needed it, I felt an instant sense of lightness and release…..

I replaced the Painted Table, which will always live in my heart, with a very practical, larger, light weight, fold up table and it works beautifully – and also doubles as a superb dining table when friends visit:)