Much like a book cover, all too often we form opinions about someone or their work based on very little information – usually brief meetings, or in the case of visual artists, one painting, exhibition or gallery representation.

In this post, still thinking about how social media has, and continues to play an important part in my life….I want to address the difficulties of being pigeon holed as an artist.         This can happen on the back of one painting, exhibition or gallery representation as well as other people’s assumptions of who you are.

This large oil on canvas (circa 1982) depicts the moment that people turn their backs on one another….(Part of a large series of paintings) 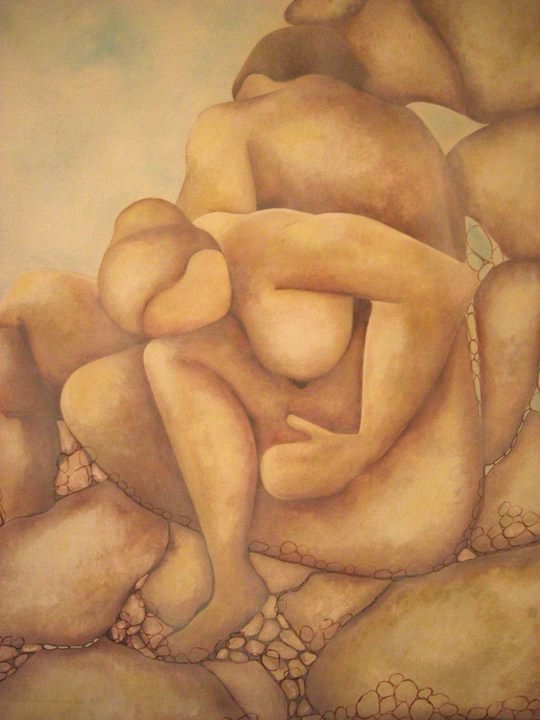 Making a living as an artist is not easy.     It takes tenacity, courage and a great deal of creativity.     As I look back on my nearly fifty year career I can see that my journey has been eventful, exciting, sometimes desperate, but throughout there has always been the knowledge that I was following the right path.

Despite the difficulties and disappointments along the way, I have, and continue to experience great joy as an artist and will forever be grateful to have chosen this path.

Large oil on canvas (circa 1990) depicting what was one of the most important turning points in my life and career. 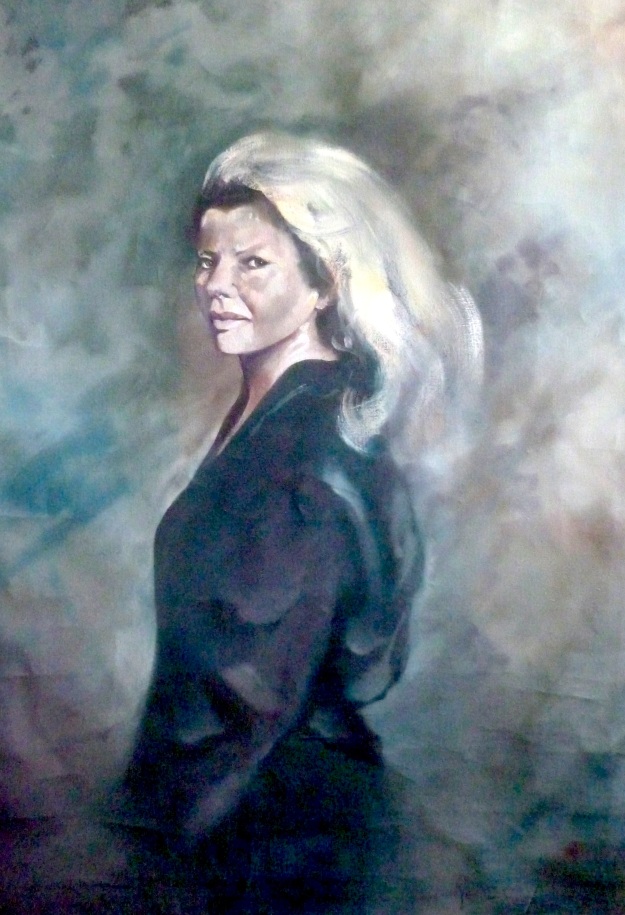 By the time I painted this self portrait (circa 1990) – I had already learned that to make my way as an artist I would need to adapt to unusual situations and trust in my intuition.    By 1990, sadly my marriage was dissolved and I was left with no money or support.

Refusing to give up my life as an artist, I listened to my intuition and chose to live and work in my West Chester, Pennsylvania, studio, which at that time had no heat or running water.     I learned so much about myself during this period.

Along with giving workshops at the Chester County Arts Association, I began working with Bonnie Paul, a well established art consultant.       Bonnie provided the art work for large corporate entities….and through her I received many commissions.

Part of the studio in West Chester Pa., on Prescott Alley.   By this time I had heat and running water in the building.

The large still life painting  you can see through the opening was part of a series of work that sold well and paid for renovations, etc. 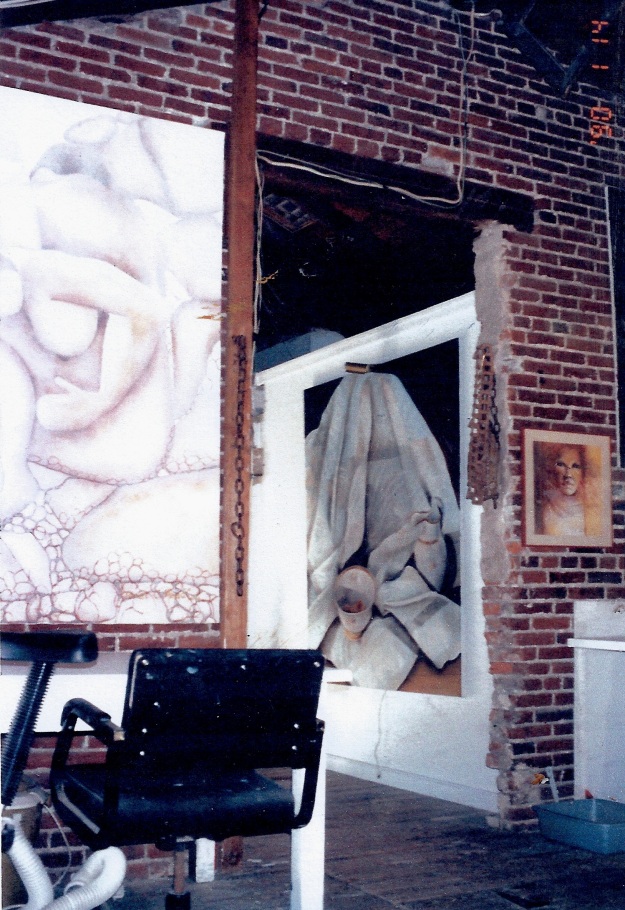 What I haven’t mentioned is that I began my career as a ‘wildlife painter’ – and so when I was commissioned to make a fund raising poster for the Philadelphia Zoo of course I jumped at it.    Proceeds from the poster were to contribute towards a new big cat area at the zoo.

Another way to make income and remember this is all before Social media….. 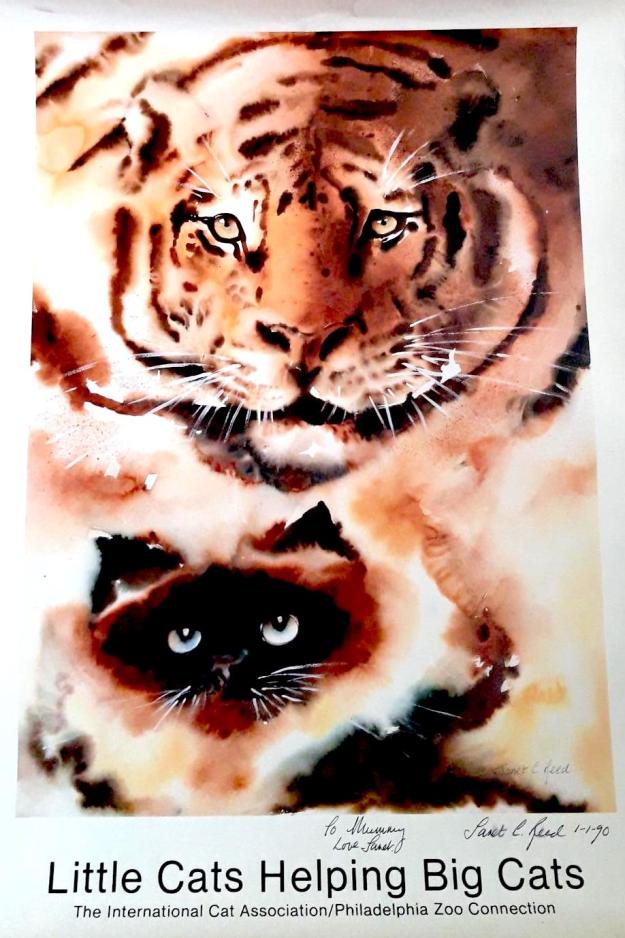 In 1993, I returned home to the UK and moved to Crickhowell, Wales (the Magical Town of Crickadoon)  where I stayed with my cousin Lyn and her family.    Through Lyn and PJ’s design company, I continued to paint murals and at the same time give workshops. and exhibit.

I took this photograph last weekend when visiting my cousin Lyn in Cardiff.   Here is Lyn standing in front of a large oil on canvas portrait I painted of. her in 1994. 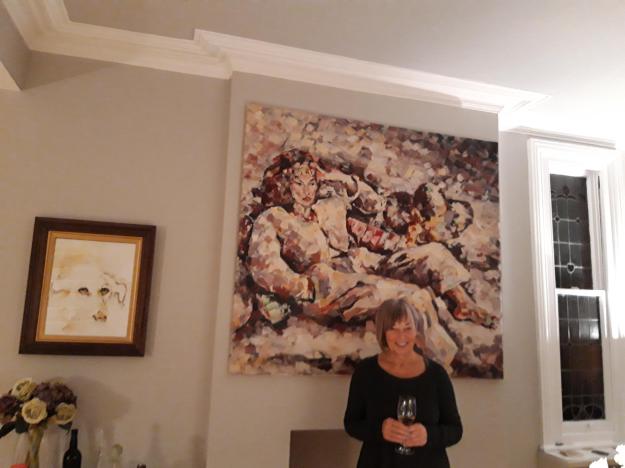 It was during my twelve years in Crickhowell, that I was introduced to the internet.   It was still prior to social media, digital phones/cameras etc….but seeds were being sown and something about it appealed to me.

It’s important to note that I only use social media to view other artists work and to show my own….I don’t use if for much else, which is why I still probably enjoy it.

Social media allowed me to show hummingbirds, and all sorts of other work.   Many of my friends on both sides of the Atlantic have noted that social media joined up all the dots…..   In short it got me out of the pigeon hole syndrome…..

Detail from large mural…where I first began to incorporate the hummingbird symbolising the unseen magic in our world.  (circa 1989) 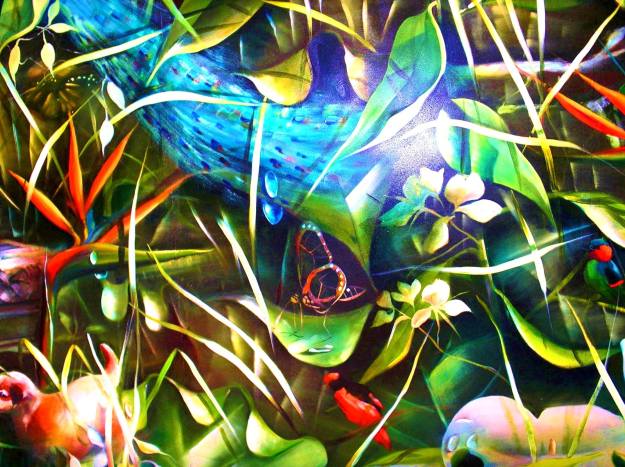 This past weekend, I filmed my first web cam demo.   Hopefully within a week or so it will be edited so that I can share with you all.    Another way that social media helps we artists.

For now I wish you all well and send a magical hummingbird.